Opt-in to Claim Your FREE Digital Copy or Page Down To Purchase.

The Top 10 Senior Activities For 55+ Residents.

Four years ago we bought a home in Valencia Cove, an Active Adult Community in South Florida.  Due to medical issues, I was not able to participate in hobbies such as golfing, fishing or traveling.  Two years ago we decided to become permanent residents.  I used to play cards, but one afternoon we played Bocce Ball with some neighbors instead.  We had such a great time!!! Bocce Ball is a game that anyone can play and it’s a great social way to have fun and meet new people.

Our Bocce Ball Club… The Beginning

Two years ago we started the Bocce Club with 100 members.  Seeing that the Bocce courts were not being utilized, I came up with the idea of starting a league.  I thought that Bocce was a great way for myself and other residents to meet other Covers (residents) in a fun and welcoming environment. Bocce ball is not a hard game to play, anyone can play it; it is very diverse and can become very competitive should a team chose to. Others play for the easiness and fun of the game.

One morning I decided to post on the Cove Camp group if anyone was interested in playing.  Some neighbors showed up. We had so much fun that I eventually started a league for fun and sent out the invitational flyer below. We currently have over 425 members… WOW!!!
Now we are a formal club with an Executive Board comprising of 6 members volunteering their time to make the Bocce Club a success.  There are also committees with volunteers running the Membership, Rules and Regulations, Inter-Community Play, Social, Information Technology (schedule, scores and E-Blast notifications) and Treasury.

I am very happy and proud to have created this Club, especially when so many happy members of our community are enjoying the game and having fun. 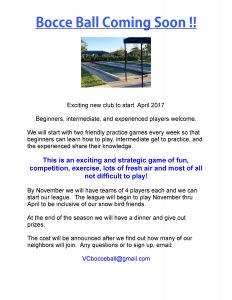 The History Of Bocce Ball
Written by: Theresa Fowler Webb
Author, So Alive After 55 – Your Guide To The Finer Points Of Active Adult Living

So what is Bocce Ball and where did it come from? I surely never knew until I asked. I had no idea how it became such a desirable and popular sport or even where it was originated.

So let’s begin with the name Bocce, which means “bowls” in Italian. It is simply a game of throwing a ball through the air in an attempt to strike away an opponent’s ball.

The Evolution Of Bocce Ball

Interestingly, many folks believe that the Egyptians, Greeks and the Romans invented a form of the game as far back as 5200 B.C. based upon visual forms of representations depicting the earliest form of Bocce Ball, (paintings, figure drawings, etc.) of those tossing rocks or balls from that time.

So here we are in 2019 and we continue to enjoy a game that was handed down from our ancestors of many, many years ago. Some things don’t really change….fun is fun!!

From Stone To Wood To Metal

In the very early stages of Bocce Ball, stones were used as the object to throw. Until the middle of the 19th Century, the balls used to play Bocce were then made of various types of wood which quickly wore out and took on a different form, rather than the round form needed. As time progressed throughout the 19th Century, the balls also progressed and now the balls available became more durable and larger and were covered with nails of different metals in order to establish different designs.

As time continued to move along, the bocce balls became available with variations in weights and patterns in order to suit various hand sizes and styles of throwing. Metal technology would now make it possible to develop custom Bocce Balls, made with symbols, with letters, numbers, flowers, hearts, etc. No argument here whose ball that may be!

Bocce Banned (in Ancient Times) Due To Popularity

A great pass-time for many folks for many, many years. So great of a pass time that Soldiers indulged in the game of Bocce as a distraction during the 15th Century. However, they would play so frequently that they would skip their archery practice in order to play. Henry VII, King of England, banned the game of Bocce, but only imposed the ban on the working class, as he himself enjoyed the game.

Other Rulers of Ancient times also banned the game, in addition to the Catholic Church. As penalties, some imposed fines, imprisonment, or even death. So you can imagine how the popularity of the game began to diminish…..and very quickly. Good thing that has all changed and that people are free to make their own decisions if they want to play and how much they want to play.

While Stuart’s club is definitely a “club success story,” it wasn’t the first of its kind. In fact, the first Bocce Club was established in 1850, in Lyon France and the first Competition was The Petecote tournament Bellecour in Lyon, France, in 1895 which continues today, and enjoys thousands of participants. Today, there are many Bocce Clubs in many communities in the United States.

The Legend Of Fanny

Many Bocce Ball players have heard of Fanny, a girl in Lyon, France who, during the years of 1860 through 1870, would expose her backside to the losers of a match. A bit risqué in those days…  The losers would then have to kiss it in defeat.  Today, it is still common for some clubs to have a picture or sculpture of her for those who lose or score no points, to kiss.

Is Bocce Ball For You?

According to the United States Bocce Federation, there are approximately 1 million Bocce players in the United States. You could choose to be one of them. You may be that unique individual, like Stuart, that may be interested and invigorated to start a Bocce Club in your community and encourage others to play. As he illustrates above, Bocce Ball can be a great way to make new connections with friends that can last a lifetime.

Help me get the word out about this awesome and exciting activity for Active Adults by using the social media share links at the top left-hand corner of this page.

Theresa was born in the Bronx and moved to South Florida in 1979 with her family. She worked her way up to the position of Vice President for one of the largest and most respected Home Builders in the USA. She managed and oversaw operations as VP of 9 Active Adult Communities for over a period of 20 years. She managed $3 Billion in Sales and Closings of 6500 Active Adult Community homes touching the lives of over 13,000 residents. She retired in August of 2017 and her life's dream has been to write a book about what she has learned over two decades about Active Adult Living. 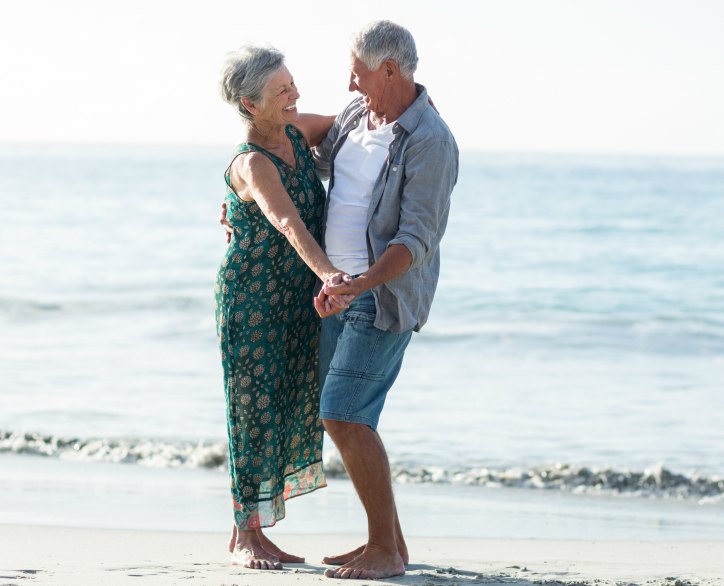 The Top 10 Senior Activities For 55+ Residents. 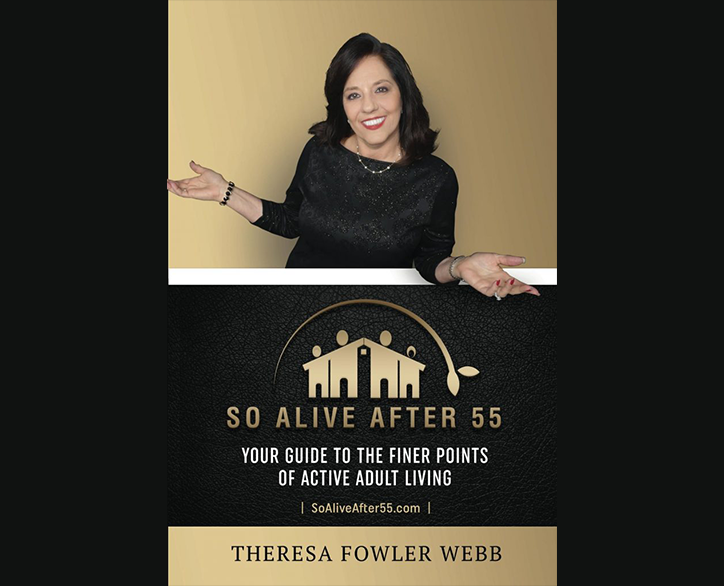